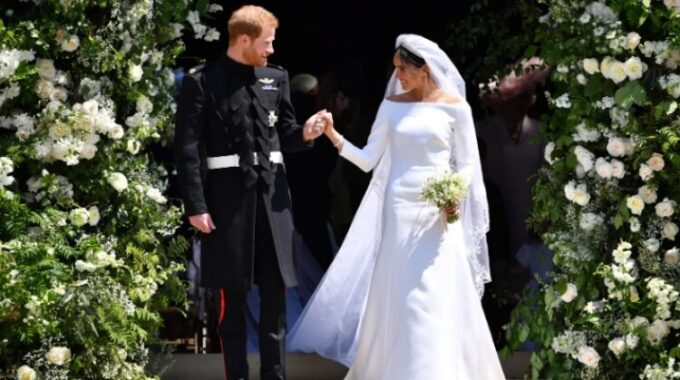 Making a wedding memorable is a dream for everyone; some do it through their celebrations, and some spend more money on photoshoots to remember this prestigious event in the future, but royal weddings are way above this league. Common people just try catching a glimpse of “extravagance”, but royal families arrange post-nuptial parties and lavish ceremonies for their guests, followed by strict security, the reason being their List-A guests. Starting with family heirlooms worn by the bride and ending with elegant celebrations, royal weddings are the perfect example of a combination of luxury and elegance.

The most important factor is that the planning & execution of such events isn’t a cup of tea. The broader issues also need to be administered, including the privacy of the family, managing and dealing with personalities out there, the crowds, and the media, and ensuring whether everything is going smoothly or not. Some of the things that become the topic of discussion or “Talk of the Town”  are the cakes baked by the world’s famous chefs and dresses designed by well-known designers.

In order to talk about the most stunning royal weddings of all time, we’ve enlisted a few here. This includes weddings of Arabs, British and many more, so you’ll get a more diverse point of view about how the royal wedding ceremonies are conducted everywhere around the world.

This is probably the most talked-about royal wedding even in recent days for a number of reasons, even though it happened back in the 80s. Charles & Diana tied the knot in 1981 at “St Paul’s Cathedral”, and the wedding was one of the most renowned ones. Well, the royals are arranging it; how can we not talk about the cost? The estimated cost of the entire event was 70-100 million dollars, making it the most expensive “British Royal Wedding” to date. The decorations, security, and attire were surely the key things to notice, but the interesting part is that the guests had the option to choose from nearly 30 cakes that stayed there for days. 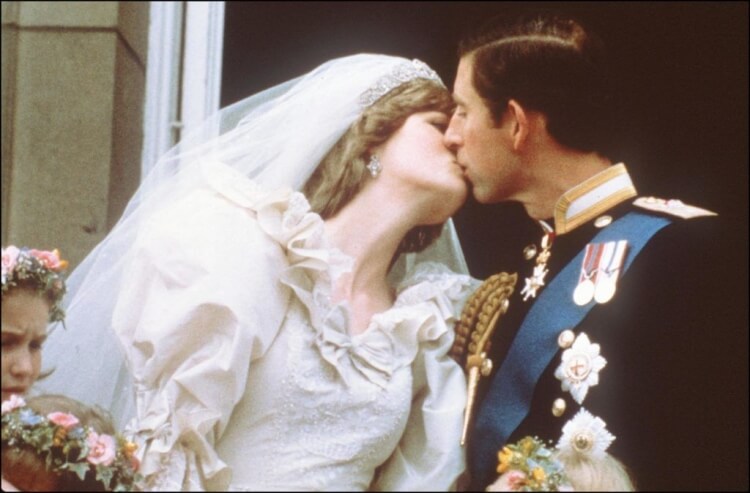 The attendees of the event were nearly 3500 people, while almost 750 million people from around the world watched it on TV. Also, more than 500,000 people gathered to witness the events. The ivory taffeta gown worn by Princess Diana had 10,000 pearls and was embroidered with lace and sequins. A husband & wife duo named David & Elizabeth Emanuel designed the dress for a hefty amount of USD 127,000 some four decades ago, which is just shocking.

This is considered to be an unfortunate wedding also (at the same time) because Diana died way before seeing what everyone wanted her to see, to be the queen. But nature had other plans. However, her death is still a mystery to date.

It doesn’t matter which country they belong to; each royal family thinks of their royal wedding event to happen in the UK, specifically London, which is famous for many reasons. The same is the case with the royal wedding of Prince Pavlos with Marie-Chantal Miller, which took place at “St Sophia’s Cathedral” back in 1995. This was a temple-themed wedding accompanied by some other festivals, and the overall cost of the entire event from start to end was nearly 8 million dollars. 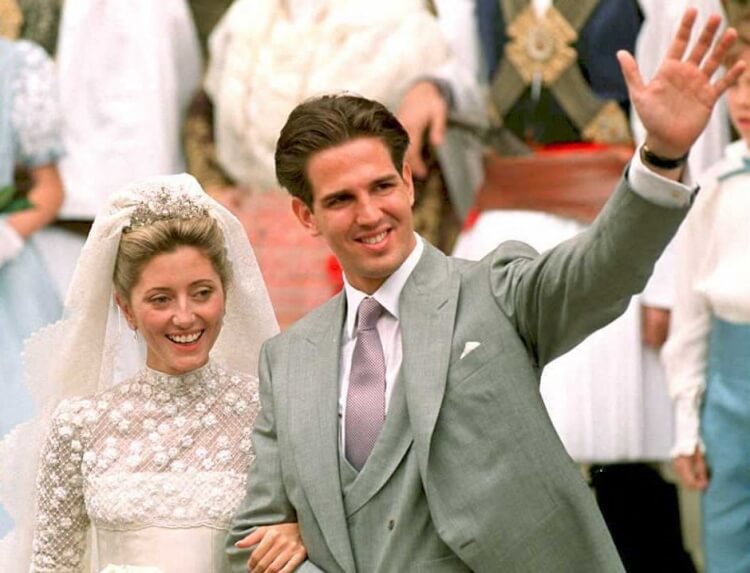 The elegant bride was wearing an “Ivory Silk Valentino Gown” having a four-mater lace train studded with pearls. The venue had nearly a hundred times more flowers than guests, with around 100,000 flowers brought from Ecuador for the event. And the attendees were 1200 in number. It was a large Royal gathering and was televised also, for people around the world to see.

This royal wedding was more like a combination of royal & non-royal partners because the daughter of the Sultan of Brunei was the bride, but the groom was from a non-royal family, and it took place in 2012. They tied the knot on Borneo Island, at a palace owned by the Sultan that had nearly 1700 rooms. The festivities went on for a week, and the expenditures were close to 20 million dollars. 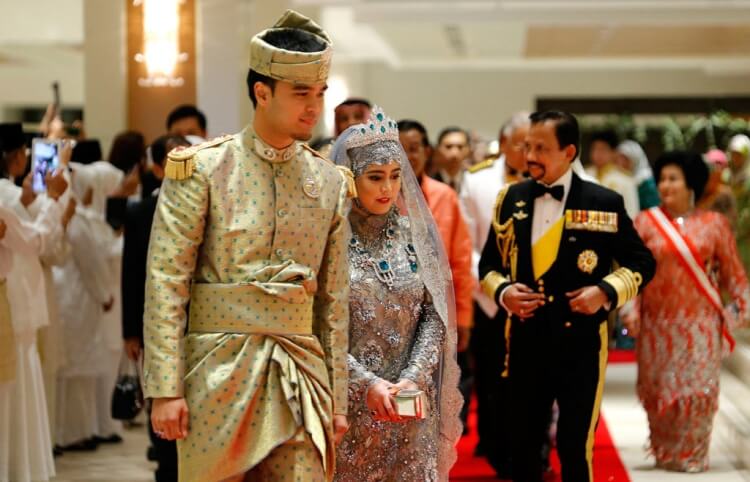 The couple got married at “Santa María la Real de La Almudena Cathedral” in Madrid back in 2004 and are now the King & queen of the country. The bride was a journalist but ended up getting married to the royal groom in the presence of nearly 1200 people. 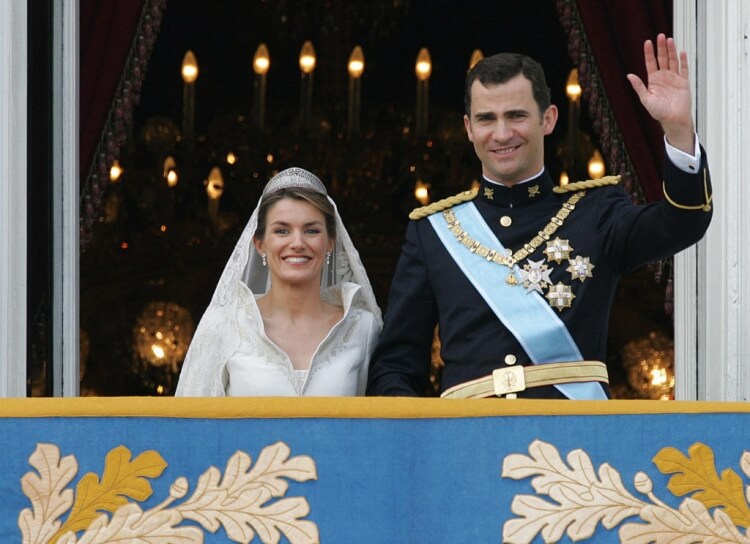 The bride was wearing a marvelous “Manuel Pertegaz Gown” having a 4.2-meter train and was embroidered entirely with gold. The height of the cake served to the guests was more than 2 meters, and around 1000 champagne bottles were served as well. The expenditures on the entire event were 25-30 million dollars. The ceremony was also televised, and it gathered almost 25 million views from Spain only. All in all, it was a beautiful event full of ceremonies and festivities.

This royal couple got married at Westminster Abbey in 2011, and the estimated cost of this entire royal wedding was nearly 34 million dollars. The exciting part is, more than 90% of this budget was planned to be spent on security only.

The gown worn by Kate was an “Alexander McQueen Handmade Lace Gown” having a 2.7-meter-long train behind it. Around 2000 guests were present at the venue to witness this beautiful event full of fun and joy, but it was televised also and watched by 3 million people worldwide. This doesn’t end here; a royal reception was also arranged after the event at Buckingham Palace to entertain the guests who couldn’t attend it. 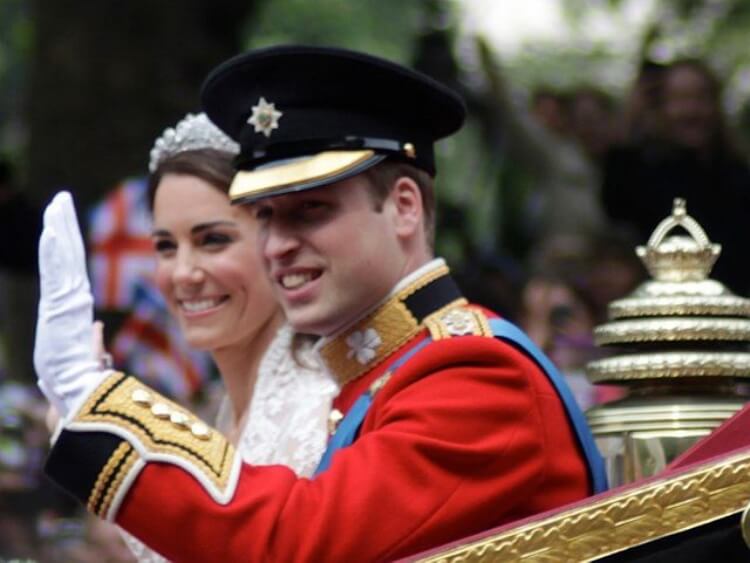 Since it was a royal wedding, the presence of celebrities was a must. The ones attending the event included David Beckham & Victoria, David Furnish & Sir Elton John. The presence of Queen Elizabeth II and Prince Charles was also a highlight. Apart from that, other royal family members were also at the venue, including Princess Beatrice and Princess Eugenie.

You don’t see a combination of athletes and royal family members quite often, but here is one such case in which Prince Albert II decided to get married to a professional swimmer named Charlene Wittstock back in 2011. The ceremony was held in “The Courtyard of the Medieval Palace” in Monaco. 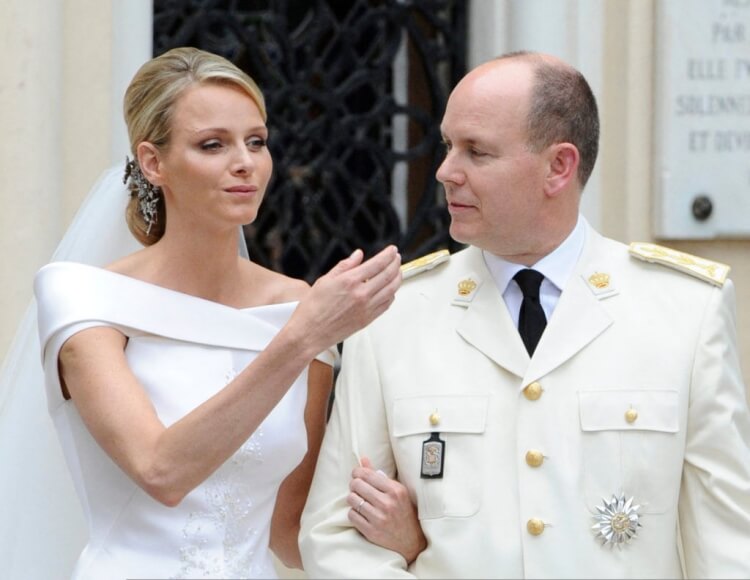 The attire of the bride looked quite simple; it was an off-white gown that had almost 20,000 pearl teardrops and was studded with 40,000 crystals. The lavish wedding ceremony kept going on for three days and it cost them almost USD 70 million. In total, 450 people attended the event, and the famous personalities include Naomi Campbell (The British Model), and fashion designers Giorgio Armani and Karl Lagerfeld. The famous American band Eagles also performed at the concert arranged before the royal wedding.

Arabs are famous for spending hefty amounts on things they like the most, and it is impossible for them not to do it at their royal weddings. That’s also the reason why the marriage of this royal couple, Mohammed bin Zayed Al Nahyan & Princess Salama booked their name in “The Guinness Book of World Records” as

the most expensive and lavish wedding of this era. You’d be shocked to learn about the number of guests; they invited 20,000 people from all over the world to witness this event and then booked a stadium to entertain them. Interestingly, the wedding took place in 1981, 3 decades ago. 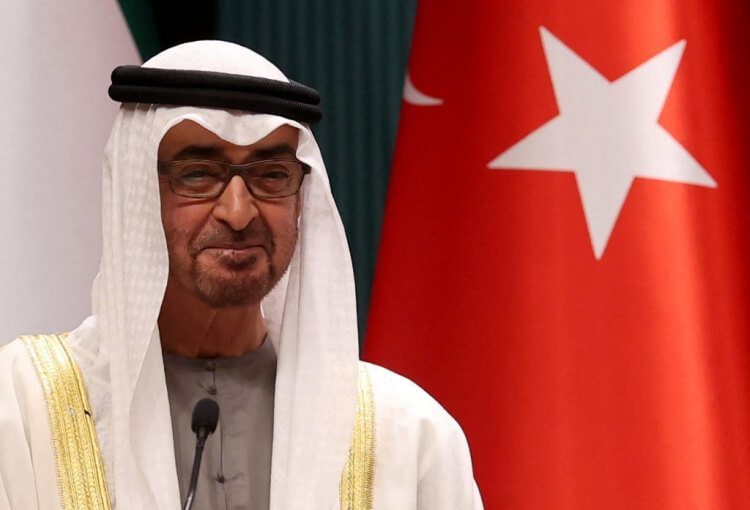 The celebrations went on for a week, but they didn’t release many photos for security reasons and other privacy issues. However, the estimated amount spent on the wedding was around USD 100 million. Forbes reported that there were 20 camels, the back of which was loaded with jewels that were delivered to the bride in terms of gifts during the event.

This royal wedding took place in 2010 at “Storkyrkan Cathedral in Stockholm” Sweden. This was memorable for one more reason, the parents of the princess, King Carl XVI Gustaf & Queen Silvia, also got married at the same venue 34 years ago.

The princess was wearing a pearl white gown with a 5-meter-long train that was detachable. And more importantly, “Par Engsheden” of Sweden designed it for the bride. The ceremonies and parties prior to and after the wedding went on for nine days, and the overall estimated cost was almost USD 2.65 million. Apart from 1200 people that were attending the wedding as guests, almost 5 million people watched it on TV, and 200,000 people gathered around to witness the celebrations. 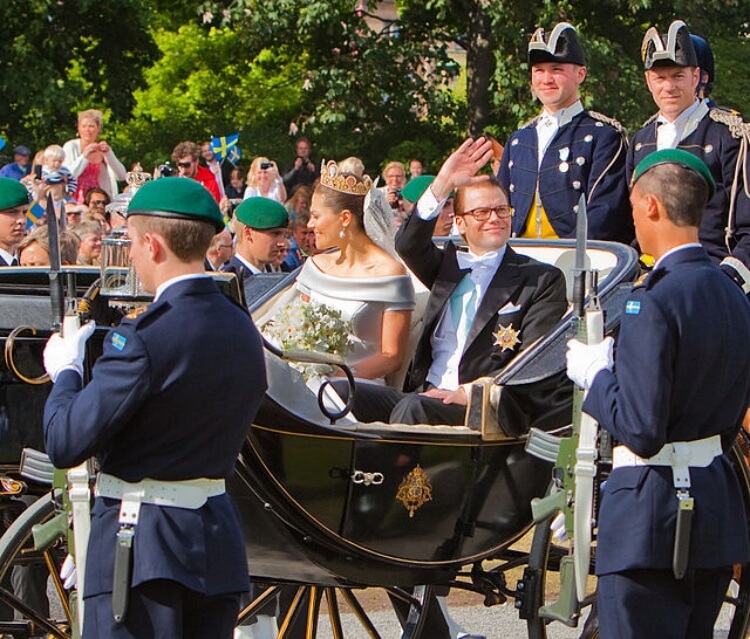 The ”Swedish Association of Bakers & Confectioners” were asked to prepare an 11-tier cake that contained different designs along with wafers full of chocolate on each layer. Overall, this was one of the most stunning weddings of all time, particularly in the history of Sweden.

This is the most recent royal wedding that all of us witnessed; it took place in 2018 at “St. George’s Chapel” in Windsor. Just like the previous British Royal wedding, the maximum budget for this one was also specified for security, with an overall cost of USD 42 million for the entire event. Some other expenses that were a part of the budget included a reception, flowers, music, and Church service.

Around 600 guests attended the wedding, and almost 2000 were outside Windsor Castle to celebrate it. Meghan looked simple yet elegant while wearing a Givenchy Bridal Gown with its 5-meter long train. The embroidery was done with flowers from 53 commonwealth countries. Some of the celebrities that were a part of this prestigious event include Sir Elton John, Oprah Winfrey, Amal Clooney, and the Beckhams. People were shocked to see the no-makeup royal wedding, but that was compensated with so many other things by the royal family.

One more addition to the list of most stunning and expensive weddings is the marriage of Prince Rainier III, who got married to an American Actress. The ceremony was arranged at “St. Nicholas Cathedral” back in 1956.

The wedding celebrations only lasted for two days, but they didn’t forget to include all kinds of ceremonies, including civil and religious ones. And more than 600 people were there to witness this all. Some famous personalities who attended it included Aristotle Onassis and Cary Grant. 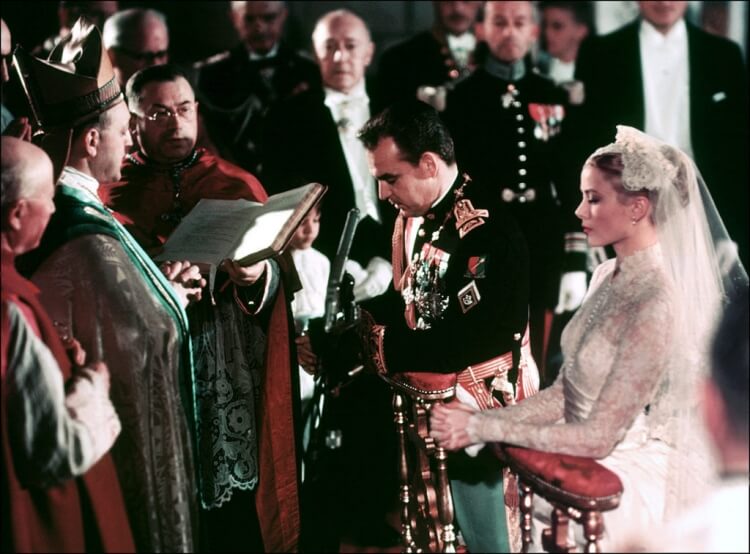 The talk of the town was the dress of the bride, featuring a high neckline, ancient pearls, and multiple petticoats. Helen Rose designed it for Grace. The cake-cutting ceremony was another unusual experience for many, as the 6-tier cake had the pink palace made on it. No one knows the exact cost of the wedding, but it was surely in millions of dollars.

Royal weddings have always been stunning and the most expensive ones. But the kind of ceremonies they arrange and the rituals they follow make them more interesting. Some do it with centuries-old traditions, while others do the same by keeping in mind the modern era. The exchange of gifts between them, the kind of eateries there and the dresses of both bride and groom become the highlight. Let’s see who’s getting married and is ready to be a part of this unending list.

As a professional folding chair manufacturer and wholesaler with years of experience exporting our products,…

Things You Need to Know Before Buying Dining Chairs

10 Best Ways To Save Money On Wedding

Wedding is a very important event in any couple’s life. It is the most special…